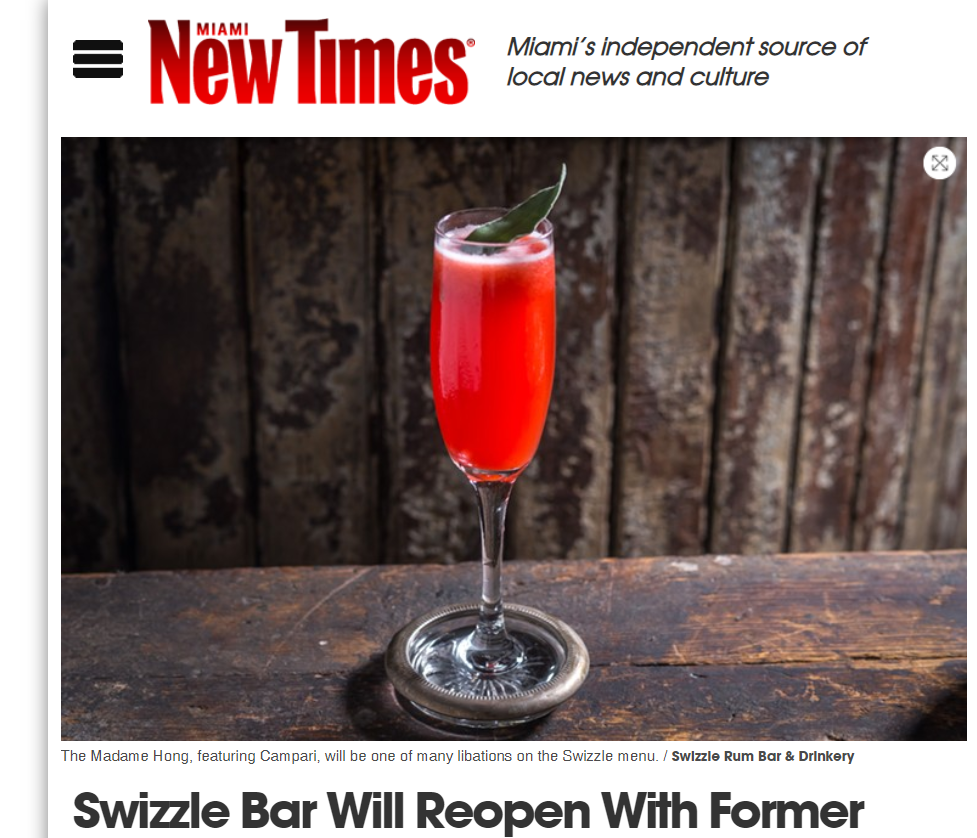 Swizzle Rum Bar & Drinkery is slated to open in late July at the Stiles Hotel on Collins Avenue in Miami Beach, barely two blocks from the original location that debuted in November 2016.

Swizzle was started as a lobby bar at the Washington Park Hotel by the management team behind Employees Only Miami (EO), which was located on the side of the property. A landlord dispute in 2018 led to both establishments shuttering abruptly, dismaying locals and visitors alike.

Danilo Dacha Božovic, recently named one of the ten best bartenders in Miami by the Miami Times and the principal bartender to open Employees Only Miami, is the driving force behind the new endeavor. He’s brought five members of the EO Miami team onboard for Swizzle, following a similar ideology in making them partners with an ownership stake in the bar’s success.

Patrons can expect an elegant atmosphere with a cocktail-driven menu and a strong emphasis on attentive service. “It’s very important,” Božovic says. “Service, technique, with the same warm hospitality we provided at EO Miami are number one for us.” One way that will be evidenced is with a complimentary sample of the bar’s signature drink upon arrival: a rum Manhattan.

As the name suggests, Swizzle’s inspiration and much of its story center on the beloved Caribbean spirit. A custom mural at the bar will tell the story of rum’s origins, as will the framed pictures that walk guests through the production process from sugarcane to bottle. This is also a kind of historical tour that bartenders can share with guests.

Swizzle will offer 150 varieties of rum. It will seat about 25 to 30 guests around the bar in a more intimate setting, and a small secluded patio area will be open until midnight. Music will be played through a vintage gramophone, evoking a speakeasy ambiance and the days of ritzy glamour. The menu will pay homage to the fundamentals of making great craft cocktails, but with a contemporary emphasis.

And rum won’t be the only standout spirit here. Božovic says to expect everything from Scotch and vodka to pisco and cachaça, most of which will be stirred, not shaken.

Cocktails include the rum-based El Presidente, containing pomegranate, molasses, and Angostura bitters; and the Pisco Smuggler, made with pisco, young coconut pureé, and white cacao.

Božovic is concocting a twist on an El Diablo with fresh ginger. Several fan favorites from EO Miami will also make an appearance, including “the best Hurricane you may ever have,” according to Liquor.com. Expect South Beach prices but world-class product quality.

A small kitchen will serve “easygoing food with rich taste profiles” to complement the drinks. Classic bar fare includes chicken wings and a Cuban sandwich, but for more adventuresome eaters, there will also be some flavors inspired by Serbia, Božovic’s homeland. The Serbian steak croquetas are served with a side of ajvar, a traditional vegetable spread that can be made spicy.

“This is something I’ve always wanted to do,” Božovic says. “I love this kind of bar. It’s everything I’ve ever dreamed of as a bartender, all in one place. The cocktail is the Holy Grail, but so is the fun.”